10 Things to do in Dar Es Salaam, Tanzania

Dar es Salaam, a major city and commercial port on Tanzania’s Indian Ocean coast, grew from a fishing village. The open-air Village Museum has re-created the traditional homes of local and other Tanzanian tribes and hosts tribal dancing. It’s part of the National Museum, which offers Tanzanian history exhibits, including the fossils of human ancestors found by anthropologist Louis Leakey.

1. SPEND TIME AT THE BEACH ON MBUDYA OR BONGOYO ISLANDS.

One of the reasons you will love Dar is because the beaches are so close to the city. Take the 30 minute ferry from White Sands Hotel to Mbudya or the ferry from Slipway to Bongoyo. Either island is fun but I prefer Mbudya because it’s a little less busy. You could stay at White Sands Hotel if you’re not up for getting on a boat and heading to an island. It’s about 30 minutes from city center but it’s a great option for food and fun in the sun.

A visit to The National Museum or the Village Museum will give you a better idea about Tanzanian history and culture. You like mostly the Village Museum, which is open-air and features a collection of 19 authentically reconstructed dwellings that show traditional ways of living for different ethnic groups throughout Tanzania. On display are also traditional crafts that showcase Tanzanian culture. You may also be able to catch a performance of traditional dance while you’re there too.

While the Arusha area is most well-known for its safaris with Ngorogoro Crater , Serengeti, Tarangire and other parks nearby, there are safaris available close to Dar es Salaam. About 4 hours and a half away is Mikumi National Park, Tanzania’s fourth-largest national park. If you’re lucky, you’re may be able to spot the ‘Big Five’ while you’re there.

If you feel like traveling a bit further, head to Saadani for a unique safari/beach experience. You most likely won’t see the Big Five here but you’ll see a good mixture of wildlife, on and off the land.

One of the most eye-opening experiences in Dar es Salaam was the Real Dar es Salaam Tour. You will learn so much about Tanzanians daily lives in Dar es Salaam. It’s easy to head to the peninsula area where most expats live, but it’s a much different story on the other side of town..

Tanzania is well-known for its “Tinga Tinga” style. It was developed by Edward Said Tingatinga, and is characterized by using several layers of bicycle paint and cartoon imaginative figures. the center is on the peninsula and easy to find.

The Kivukoni Fish Market is famous for offering various kinds of seafood at very low prices. Everything from fish to octopus and shark are available. But word to the wise, don’t wear shoes or clothes you care about. I’m not sure the smell will come out in the wash!

This is a great option for a day trip from Dar. About an hour and a half away are the ruins at Bagamoyo. Dating back to a period between the 13th century and the 16th century, the Kaole Ruins are what remains of a Muslim Shirazi (small East African tribe) settlement.

There are so many great restaurants in Dar! Here’s a quick rundown:

Kariakoo Market is Dar’s busiest market. Located in the city center, Tanzanians head to Kariakoo to buy anything they could possibly need. From produce and vegetables, to fabric for clothes, electronics for their homes and tires for their cars…it has everything! Uhuru Street is nearby and is the best place to buy fabric in case you decide to have clothes made while you’re there.

You can buy souvenirs at Kariakoo but you can also head to Slipway on the peninsula. It’s an open-air market where you can find gifts for family and friends. You can’t go home empty-handed!

As you can see, Dar es Salaam is worth considering when you visit Tanzania. Before heading to Zanzibar or Arusha, carve out some time in your schedule to explore one of Tanzania’s biggest and most populated cities. 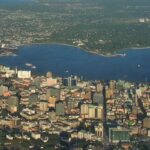